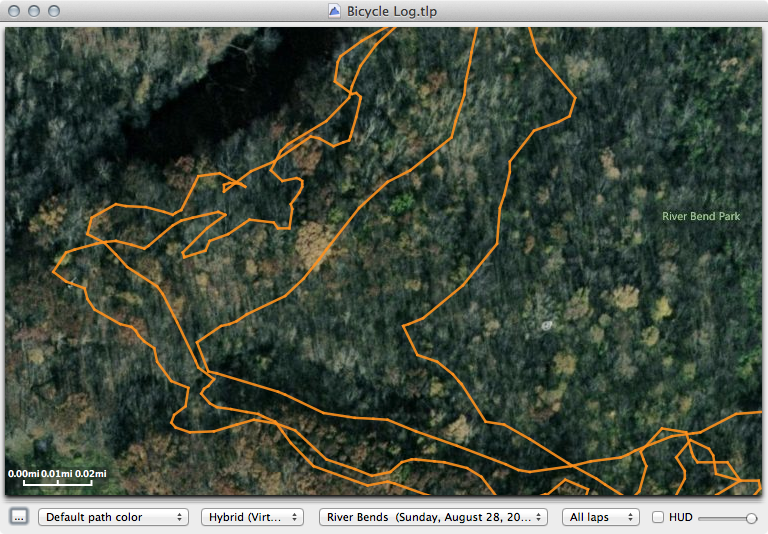 Past experience with wildly varying data has prevented me from trusting GPS-based devices for accurately logging distances while riding mountain bike trails, but after hearing reassuring reports of modern units and seeing how useful it could be to have one unit logging data for all three of my bikes and automatically aggregating it I decided to give it a go. I purchased a Garmin Edge 500 cycling computer and a GSC 10 wheel speed / pedaling cadence sensor a month ago and after beginning to use it things seemed quite accurate, but I continued to be a bit suspicious that it may not be providing as accurate of data as it could. So, I decided to do some tests.

The results of these tests have shown that when the Edge 500 is used in conjunction with the GSC 10 it is just as accurate as a wheel-based computer and can be relied on to provide sufficiently accurate distance measurements while riding curvy mountain bike trails. Coupled with all the extra data that the system can log (heart rate, location, temperature, cadence, etc) it’s quite a nice system for recording data.

Without the GSC 10 (using only GPS-based data recording) the Edge 500 showed drastic undermeasurement, 20.70% on a typical Southeast Michigan trail ride and 33.87% in a worst-case test scenario. 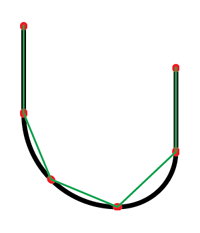 When a GPS (alone) is used to record a route a series of samples are taken recording the device’s position. Math is then done to calculate the distance between the current and previous positions, and this distance taken in conjunction with the elapsed time this calculation can be used to determine speed.

When a bicycle traverses a curve this method of sampling results in the curve being broken into a series of straight lines the sum of which have a shorter length than the curve itself. Multiple tight curves compounded over a lengthy ride can cause a drastic under measurement of trail length. This is a real world example of a problem known as aliasing.

The image to the right illustrates this type of aliasing by showing a trail in black, red spots for the points where measurements are taken by the GPS, and green lines illustrating what the GPS (based on calculations) feels the distance between each point really is. These green segments are shorter than the actual black length of the trail, and this shorter measurement can add up over an entire ride resulting in the logged distance being considerably shorter than what was actually traveled. Thus the variation in measurement between actual route length and measured length can be compounded based on sample rate, speed, and how curvy the trail is, but other factors including GPS accuracy can come into play as well.

Traditional bicycle computers rely on a sensor watching for each rotation of a bicycle wheel and then use the count of rotations in conjunction with the circumference of the wheel and a clock to calculate distance, speed, etc. These devices don’t have a problem with aliasing because they are simply measuring the distance traveled by the bicycle wheel, a value which is almost always equal to the length of trail traveled. (While skidding wheels on downhills, spinning while climbing, and moving through the air may affect these results, the amount of time spent doing these is typically so minimal as to render these situations indistinguishable from background noise.)

The Edge 500 + GSC 10 system has all the instrumentation necessary to overcome aliasing by using a wheel sensor as a traditional bicycle computer does and incorporating these results into the overall logged data, but nothing in Garmin’s documentation illustrates (or even claims) that it does this or anything else special to ensure most-accurate recording. Garmin’s website for the GSC 10 doesn’t mention any distance accuracy benefits, choosing only to tout the fitness feature of measuring one’s cadence:

Monitor your pedaling cadence as you ride with this self-calibrating, wireless speed/cadence sensor. It measures and reports your pedaling strokes per minute, providing feedback for optimal performance.

Garmin’s only mention of the GSC 10 as being used to record distance data comes from this cryptic blurb from Page 28 of the Edge 500 Owner’s Manual (PDF):

If there is no GSC 10 paired, GPS data is used to calculate the speed and distance.

Anecdotal evidence from friends and various online forums point to apparently accurate data being received when using the Edge 500 along with the GSC 10, and their suppositions have proven to be correct. When used with a GSC 10 wheel diameter (the most accurate measure available as it bypasses aliasing) is used for calculating distance; exactly what I was hoping for.

(Note that technically any trail of any curvyness could be effectively recorded by sampling discrete points, but as dictated by the Nyquist–Shannon Sampling Theorem the sample rate must be greater than 2x the frequency of the curve. Most GPS units only record up to 1 second accuracy, meaning that any curve which can be traversed in less than two seconds cannot be accurately measured. This, of course, also ignores GPS accuracy issues (complicated further by tree cover, mountains, cliffs, etc) which throw another wrench into our measurement accuracy.)

The Solution
In short, the use of a Garmin GSC 10 wheel speed / pedaling cadence sensor connected to the Edge 500 along with an accurate wheel diameter setting (auto calculated or otherwise) ensures accurate distance results when riding trails. This is because, when available, the Garmin Edge 500 will use the wheel rotation information to determine distance. 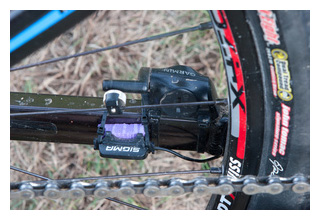 To determine if the Garmin Edge 500 + GSC 10 uses the wheel speed sensor for logging speed and distance, I set a bike up with a second, traditional style bike computer (a Sigma BC 1609). This computer’s sensor was positioned next to the GSC 10 and using the same spoke magnet, ensuring that it would receive wheel rotation pulses at essentially the same time as the Garmin system. A series of self-calibration routines for the wheel were run by the Garmin to ensure that a consistent reading was received, and then this diameter was entered in the BC 1609 so both units were set to use the identical wheel size (2190mm circumference). Photos of this setup can be seen here and here.

All tests were performed with the Garmin Edge 500 in Smart Recording mode, which Garmin describes as follows:

This varies from the Every Second mode and is likely the less accurate of the two, but in the interest of determining potential for inaccuracy leaving this default setting should suit our needs nicely. Testing Smart Recording versus Every Second is worth of further research, but that’s work for another time.

Three scenarios were then set up for testing, a worst case, a typical trail ride, and a typical suburban ride to a trail system, around the trails, then back. Amongst these a total of six test cases were set up, all designed to compare the resulting data from the Edge 500 to the BC 1609; tests to determine the GPS function by comparing it to the known standard of a traditional bike computer.

The Results
The data resulting from these test cases are as follows: 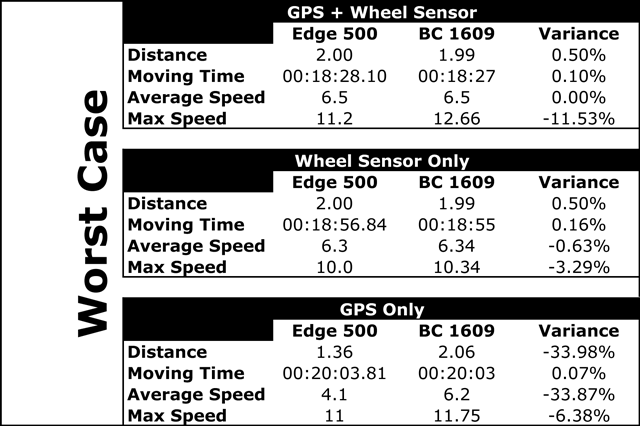 Worst Case: A series of tight loops, frequent turns, switchbacks inside of garages, and slow speed riding through the courtyard in front of my garage; roughly a 60′ radius paved loop. This was specifically chosen to be difficult for GPS to track. Three tests were run, one with GPS + Wheel Sensor, one with Wheel Sensor Only, and one with GPS Only.

This test shows that the Garmin Edge 500 and the Sigma BC 1609 nearly match when a GSC 10 wheel sensor is used. However, as soon as the wheel sensor was disabled the GPS-only distance determinations showed a tremendous amount of under recording. Over the course of three miles the GPS-only Edge 500 lost a full one third (33.98%) of the distance. While this really was a very challenging route to follow (image here), it illustrates that GPS-only data recording is prone to error on tightly curving paths.

Stony Creek: Typical southeast Michigan single track, with a good mixture of curving trail and straight sections. Used to compare the Edge 500 to the BC 1609 using GPS + Wheel Sensor to GPS Only. Two tests runs were made, each consisting of one non-stop loop of the MMBA Wednesday Night Group Ride route, one with GPS + Wheel Sensor and another with GPS Only. (This route can be seen using this map and following points 25-28-24-21-22-4-5-6-19-18-20-16-15-25.)

The Stony Creek test shows a 20.70% under recording of distance on this typical trail and route when using just the Edge 500‘s GPS sensor (in Smart Recording mode) for recording the route. This is nearly one mile lost for every five ridden.

River Bends: Riding to a local trail from my house, around for two laps, and then back home. This is a typical ride for me, partially road/pavement and partially single track. This test shows that under this situation the Garmin Edge 500 and Sigma BC 1609 match, which is as expected.

Testing Assumptions:
The following assumptions were made during this testing:
· 1% – 2% variance between computers (GPS vs. traditional) is acceptable. Due to a number of factors (wheel size, specific path followed down trail, Coastline paradox, etc) it is not possible to get a perfect number. A good number that doesn’t vary much is acceptable.
· GPS (in)accuracy is not taken into account.
· Wheel size can only be determined with a certain degree of accuracy. As a bicycle tire (in particular a large, squishy mountain bike tire) deforms while riding the circumference changes frequently while riding. An incorrect value could exacerbate or diminish variance between the Edge 500 and BC 1609 and would also lead to overall distance measurement errors. While as accurate as possible for this testing, it must be accepted that the circumference used is also not perfect.
· Variances in Moving Time are likely caused by slight differences in how movement is detected and potential landing (when stopped) of magnet between the wheel sensors and can be ignored.

This site uses Akismet to reduce spam. Learn how your comment data is processed.