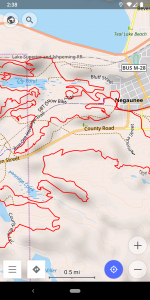 Many of the popular, long cycling events — or even just solo rides — require a GPS so that one can follow a route in order to navigate. While most of us have bike computers that will show the route, most folks don’t have a GPS with the kind of detailed base maps that become useful for detours, emergencies, or just as an additional tool… Much less something that works when outside of cellular coverage areas.

For this, I recommend you look at offline maps using OsmAnd.

I have (and love) the Garmin Edge 130 as it’s perfect for my riding and training. It’s been great for displaying recording data and following routes from the unmarked 100 mile versions of The Crusher and Barry-Roubaix, to augmenting signage in Marji Gesick and following a route through remote parts of Batchawana River Provincial Park. But occasionally I need a bit more; something to help find a detour around a flooded road, a quick way back to the car in a rainstorm, or just a sanity-check of which branch to take at a fork on the road.

Sure, I could buy a super-high-end bike computer that features detailed base maps, but I rarely need these and don’t want the physically large computer on my bike. So I use my phone, running OsmAnd, loaded with offline maps that display without requiring a data connection. Coupled with putting one’s phone in Airplane mode (turns off the cellular and WiFi radios and saves battery — yet GPS still works) a modern phone will typically get days of battery life while sleeping, with maps and a route quick to access.

Whenever I actually need to see this map I simply pull it out of my pocket or bag, wake it up, get what I need from the map, and carry on. No screwing around with a small touch screen and funky zooming on a Garmin or Wahoo. (I believe that, to date, neither Garmin nor Wahoo have made map perusal as straightforward as it is on a basic mobile phone.)

This is also a great way to get maps on your phone when traveling somewhere costly for cellular data, like during a day-trip to Canada.

Whether you’re doing Marji Gesick or The Crusher or just following a route found on a cycling club’s website, I recommend augmenting your navigation with offline maps in OsmAnd by doing the following:

Once I have everything set up, here’s some tips about how I actually use OsmAnd while out on my bike:

While this is just a basic overview of using OsmAnd and how I use it when cycling; it does a whole lot more including recording routes, navigation, editing map data, sharing location between contacts, and more. Give the online Help and Features a look for more information.

Published in cycling, mapping and outdoors